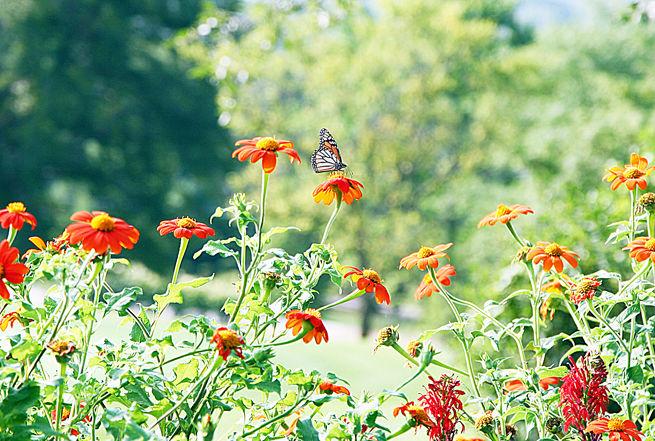 Judy Tobben was walking out of the clubhouse at the Franklin County Country Club (FCCC) in Krakow a couple of weeks ago when she saw Dave Wehmeyer, the horticulturalist on staff, driving by in a golf cart. She stopped him just to share how impressed she was by the landscaping.

“Who needs the Botanical Garden (in St. Louis)?” Tobben remarked. “We have our own botanical garden right here now!”

She’s not alone. Every day it seems Wehmeyer is hearing positive remarks from people who are noticing the improvements he and Course Superintendent Ed Wachter have been making to the grounds with the plant selection and placement. One of Wehmeyer’s favorite comments came from a golfer who regularly brought his granddaughter out to swim in the pool over the summer.

“It takes us forever to get to the car now, because she has to stop to smell every flower,” the golfer remarked.

That’s the idea, said Wehmeyer — to make people naturally happier and more relaxed by surrounding them with colorful plants and flowers. Actually, that’s only part of the plan.

The other part is to increase habitat for pollinators and other wildlife as part of the Monarchs in the Rough program, a partnership between the Audubon International and Environmental Defense Fund that works with golf courses to restore pollinator habitat in out-of-play areas.

“The program connects and supports superintendents and other golf course staff as they plan, install and manage habitat projects for the monarch butterfly on their courses,” the website, monarchsintherough.org, reads. “Monarchs in the Rough provides regionally appropriate milkweed seed to golf courses, enough to establish about 1 acre of high-quality monarch habitat when planted with a native pollinator seed mix.”

You don’t have to go beyond the front entrance of the country club to see the results. The area just in front of the clubhouse, this time of year especially, is alive with activity from hummingbirds, butterflies and bees. They flit and buzz from flower to flower.

“Usually around 10 a.m. is when we start seeing the monarchs,” said Weh-meyer.

In addition to participating in the Monarchs in the Rough program, the FCCC also is a member of the Missouri Prairie Foundation and is an official Monarch Waystation for the Monarch Watch program.

When Wehmeyer was hired at FCCC about a year ago, he was given an assignment — add color to the landscape.

“Since the golf course is something that people play every day of the year it seems like, even in the wintertime, the idea is to have color all year as much as we can,” said Wehmeyer.

He and Wachter decided specifically to focus on adding pollinator plants that would attract and benefit butterflies and bees. And native plants, like the coneflower, are ideal.

“If you can have less maintenance and make it so that it supports other forms of life, it just makes sense,” Wehmeyer remarked.

He uses as many perennials as possible, but to maintain color throughout the season, that requires some annuals too.

“Marigolds are a great pollinator. We have the coneflowers for summer, sedum for fall. There’s milkweed in there. We have allium in there,” said Wehmeyer. “The goal is that every tee console will have color and still have pollinators.”

There also are butterfly bushes, surprise lilies, daylilies, zinnias, blue salvia, bulbs, cattails in a wet area, hanging baskets in trees around the clubhouse . . . the list goes on and on.

Some of the plantings create a rainbow of color that is so striking, the golfers are even making comments about it.

“When I first started here, I kind of felt like the golfers were like, ‘This is our turf!’ And now they are seeing the coloring and saying, ‘Oh, we need some color here and there.’ Now they are starting to appreciate it, which is really kind of cool,” said Wehmeyer.

There are plans to add three evergreens to an area of the front entrance where a pear tree was removed. Wehmeyer is already thinking ahead to Christmastime, when he can hang lights in the trees and hang a wreath on a small area of fencing that was installed recently.

Keeping all of the plantings looking their best requires a lot of time and energy. Wehmeyer said every day at the FCCC is different for him, but his typical day involves watering first thing in the morning, and then picking out one of the beds to start weeding, deadheading and mulching.

“When you have more than 50 beds, you just have to pick one area at a time,” he said, noting that number is increasing too.

It can feel overwhelming at times, but it’s fun for Wehmeyer, a dream job.

“You can be very creative,” he said. “People appreciate it, and the potential is there.”

To help keep the cost of adding so many more plants to the landscape, Wehmeyer last year harvested the seed from some of the annuals, like zinnias, and grew more in the greenhouse on the property.

“This was the first year it became a growing greenhouse,” he said. “It used to be just a place to store the banana trees and hibiscus, but we added more benches this year and made it a working greenhouse. We hope to do even more next year.”

The FCCC was able to hold a plant sale from the plants grown in the greenhouse. It was successful enough that the staff was able to use the profits to purchase some additional equipment.

In addition to increasing the plantings, Wehmeyer and Wachter also are looking to add barn owl boxes to the grounds to help with the shrew population, which causes problems by creating tunnels in the ground and eating the flowers. The men went to a seminar in June to learn more about the idea.

The FCCC already has 16 bluebird boxes installed around the course.

They also have checked into bringing in goats to control some of the invasive plants, including a patch of poison ivy.

“We are trying to reduce the chemicals as much as possible,” said Wehmeyer.

That is one of the criteria for the Monarchs in the Rough program, which requires courses to address several areas to qualify for certification, including wildlife habitat management, water quality, water conservation, reduced chemical use and outreach/education.

“Basically you show them you have the plants to provide nector and the milkweed, shelter for (the butterflies) and you have water on site,” said Wehmeyer.

To address the water quality management, the FCCC will test all of its ponds, Wehmeyer said, and for water conservation, he will use native plants as much as he can to reduce water usage.

The FCCC has welcomed groups like the master gardeners and the Washington Garden Club to the FCCC as part of its educational outreach. Wehmeyer said they also have talked about adding signage to the plant beds to educate people about what they are seeing.

Wehmeyer, who has a degree in horticulture from East Central College and has worked as a grower, doing landscape design and also selling plants, said he doesn’t necessarily have a favorite area of the grounds, but he does love how much color people see as they drive in the entrance and make their way up to the clubhouse.

“The main entrance really pops now,” he said. “You can see all the activity from the hummingbirds, butterflies, bees . . . it’s alive! That was the goal, and I think we’ve achieved it.

“I just felt like when you drive up, you needed something that said, ‘Welcome!’ ”