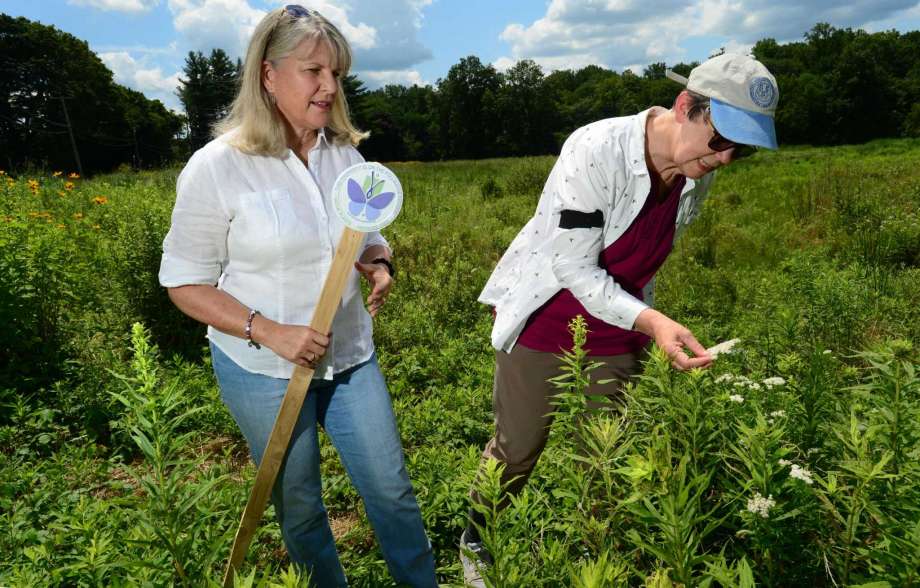 Looking for something easy to do that will help the local environment? Mary Ellen Lemay has a simple answer: Build a highway in your backyard.

Lemay, the chairman of the town’s Conservation Commission, is hosting a program on what she calls the Pollinator Pathway Feb. 19 at 6:30 p.m. at the library. The pathway is an effort to create pollinator-friendly habitat and food sources for bees, butterflies, hummingbirds and other pollinators along a series of corridors.

“It actually started out in 2016 as a really small neighborhood project in Wilton,” Lemay said. “We decided we needed to do outreach to local landowners to get them to understand how what they do in their backyards was important.”

The idea of the pollinator pathway grew out of a volunteer effort in Norway.

“A woman in Oslo created an initiative to have pots of pollinator plants, and it would create a highway for bees and butterflies to spread throughout the city,” she said. “We wanted to see if we could duplicate that here.”

What started with a handful of volunteers in one town has grown into a network of 85 communities from the Hudson to the Housatonic rivers and beyond, Lemay said. Now it’s time to get Trumbull into the network, she said.

Pollinators like bumblebees tend to have a range of about 750 yards so the goal, Lemay said, is to establish habitat areas that are no farther apart than that. The habitats can be as small as a potted planter or a 5-foot by 5-foot section of lawn – or as large as a golf course.

“Golf courses make fantastic habitats because of the open space,” said Doug Snyder, property manager at Tashua Knolls. “There’s a list of wildlife that I see daily on the property.”

Golf course officials have taken efforts to create safe havens for wildlife, including roping off areas near dens where coyote pups are living.

“We try to let them do their thing,” Snyder said.

Tashua is also following two other key recommendations for creating a pollinator pathways: Being mindful of pesticide use and planting native plants and shrubs.

“We’re in the beginning stages of getting certified through Audubon International, and we’ve been working with a group, Monarchs in the Rough, to create habitat and for monarch butterflies,” he said.

“We’re very precise. We don’t just spray the course, we apply spot treatments,” he said. Also, when applying pesticides, workers will protect bees and other pollinators by cutting the area to be treated.

“If there’s clover there, we cut it close, and that takes off all the clover buds and flower tips,” he said. “With the buds gone, the bees aren’t attracted to the area so the pesticide doesn’t kill them. Then in a few days the buds grow back, the bees come back, and by that time it’s safe for them.”

Those same practices, on a smaller scale, are what Lemay hopes Trumbull homeowners begin to adopt.

“We want everybody,” she said. “This can be done on any scale – even a container in your backyard will begin attracting pollinators. They’ll find it.”

While Lemay said the idea of creating pollinator-friendly habitat generates enthusiasm among many people, she does meet resistance from those who covet an year-round emerald green manicured fescue lawn.

“It’s crazy what we do to maintain a barren landscape,” she said. “Lawn grass is the number one crop in the country.”

According to ScienceLine, which is published by New York University’s Science, Health and Environmental Reporting Program, more area is dedicated to lawns than to the next eight largest irrigated crops combined.

Still, even those who want to maintain a turf lawn can do simple things like choosing less toxic fertlizers, and maybe allotting a little space for a clover patch or planting some goldenrod around the perimeter of the yard. Generally, once they see results, homeowners are hooked, Lemay said.

“I find that when people see monarchs and bumblebees, the get a sense of ownership and then they don’t want to do anything to hurt them,” she said. “Even a pot on your deck will bring them in.”

The backyard habitat also creates an opportunity to create a new generation of environmentalists, she said.

“Within hours, you’ll start creating biodiversity in your own yard,” she said. “It’s an action step you can take for something that you love – your home and your town.”